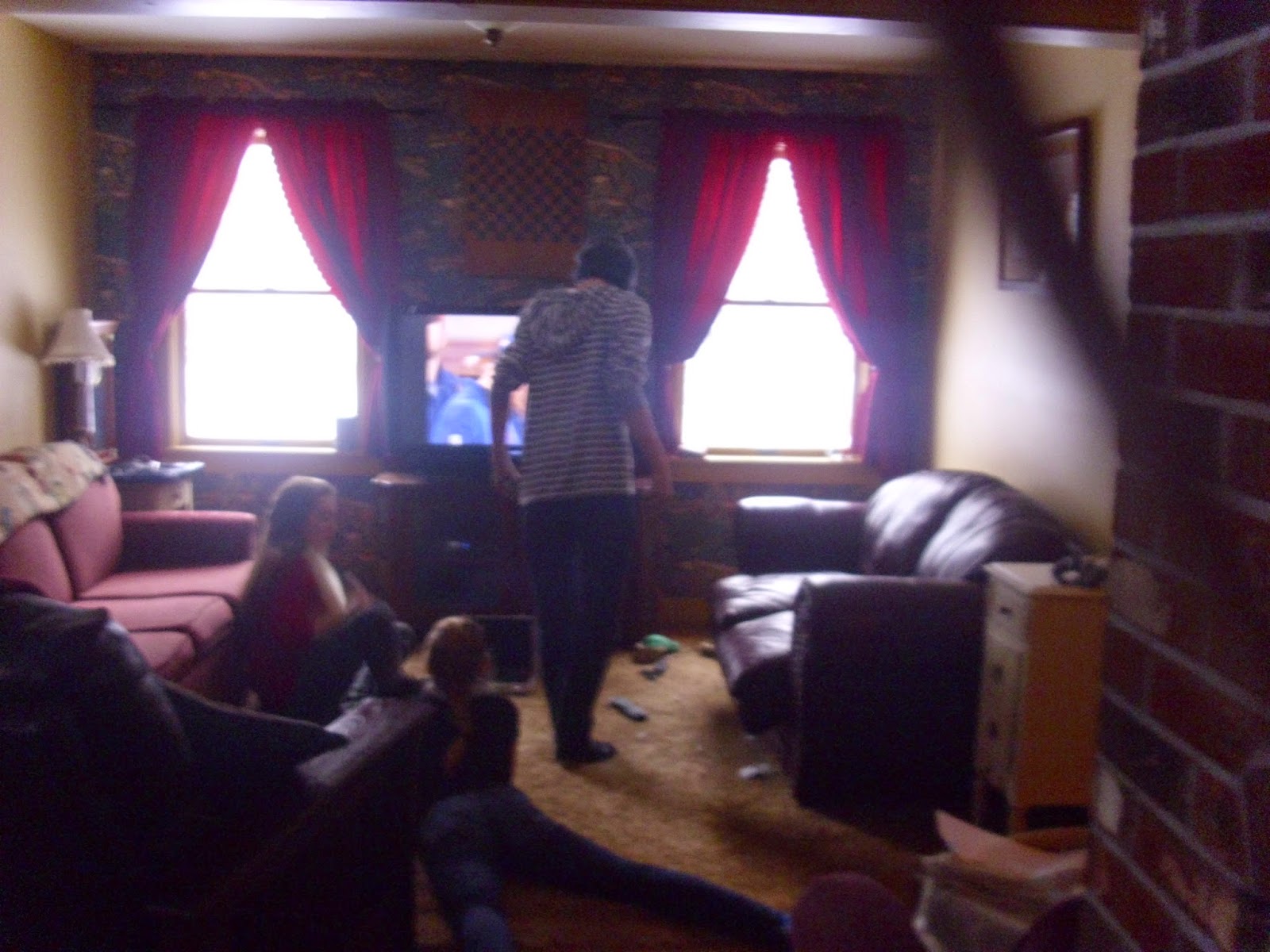 Ena, age 4 at the time, goes to a Chinese restaurant with her family. The waiter speaks very broken English, but eventually they order and he walks away.
ENA: That's the problem with these places, they all speak Spanish.

On our Missouri trip last summer, loading up to travel home in my uncle's amazing mini-bus.
ENA: I claim the seat behind the driver!
AJ: But you got it the entire trip out!
ENA: That's why I should have it on the way home.

Also in Missouri, touring the Mark Twain caves:
TOUR GUIDE: (jokingly) It gets pretty tight up ahead, so you might need to push the person in front of you!
ENA: (observing the larger man ahead of us) He's all yours, Lily.

After taking a bath, Abby (6 at the time) runs into her parent's room without any clothes on.
ABBY: (Looking at herself in the mirror) I'm Bee-Auu-Teee-Fuuuuul!

^No self-esteem issues with that one.

This Thanksgiving:
LILY: Ugh, Beanie, you're so naive! I don't even know what that means but I know it's bad!

On New Year's:
LILY: I owe Ena $5.
ME: Why?
LILY: Because I didn't workout yesterday morning.
ME: So why do you have to pay Ena?
LILY: Because I bet her that I would work out every morning, and if I didn't, I'd pay her five bucks.
ME: And why did you agree to that?

As our preacher walks up to give the sermon.
JAMES: Not this guy again! Doesn't he ever get tired?

While making no-bake cookies.
ME: (scooping in the oatmeal).
LILY: You guys should make oatmeal with that sometime.
ME: We do, Lily. It is oatmeal.
LILY: No! That's not oatmeal, it's oats!

*cue long argument where Lily claims that it's oats when it's uncooked, and oatmeal once it is cooked, and I argue that when a recipe calls for oatmeal, you put in uncooked oatmeal, not cooked oatmeal. Dad eventually feeds the argument by googling it.*

Meanwhile, AJ is up in his room, playing video games with friends:

LILY: (loudly in the background) IT'S CALLED OOOOAAAATSSSS!
FRIEND: Um, what was that?
AJ: Lily and Gillian are arguing about oatmeal.

PS-Here's a whole post about my darling Ena.
No comments: 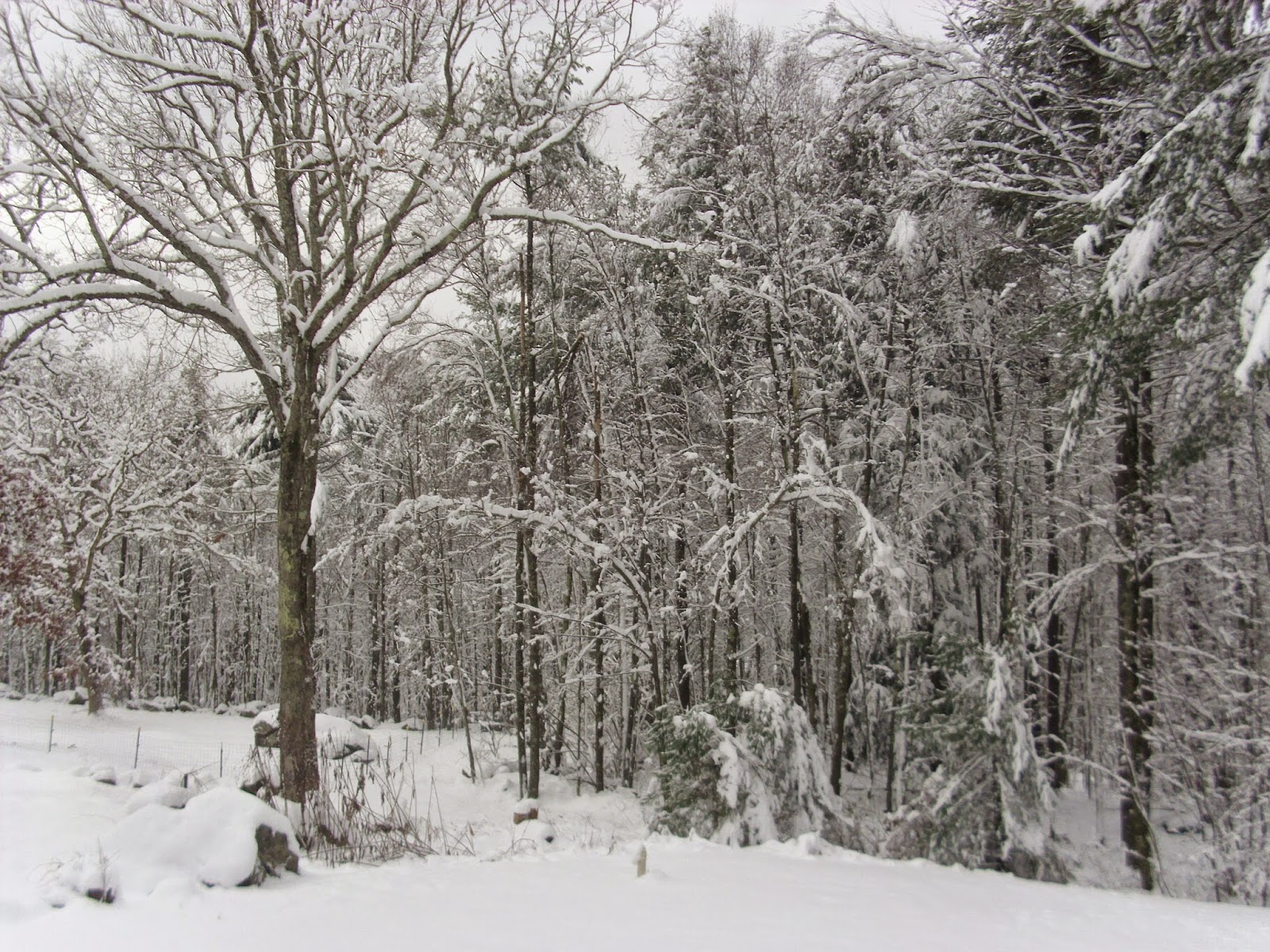 Two stents without electricity (but hey, it's back on now). 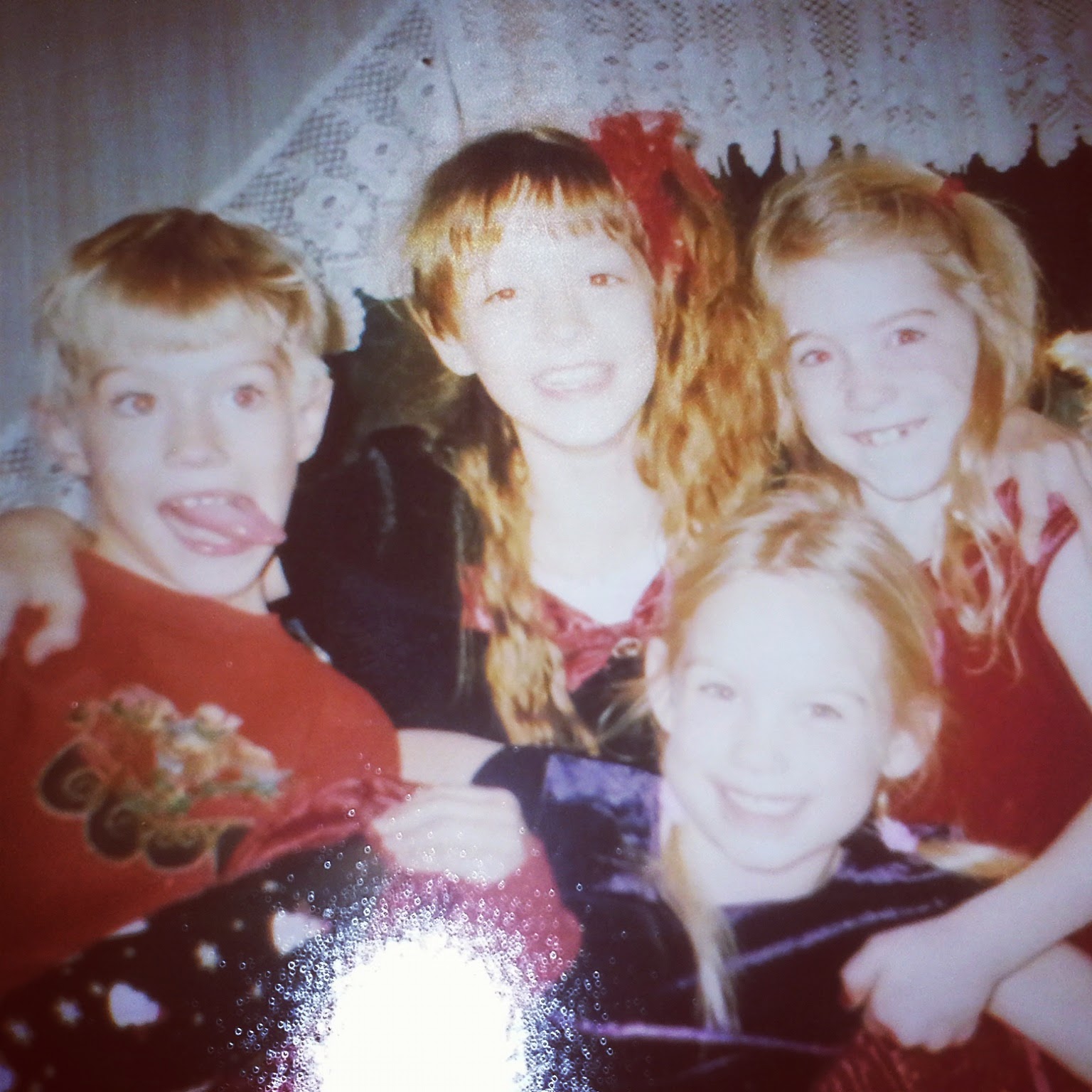 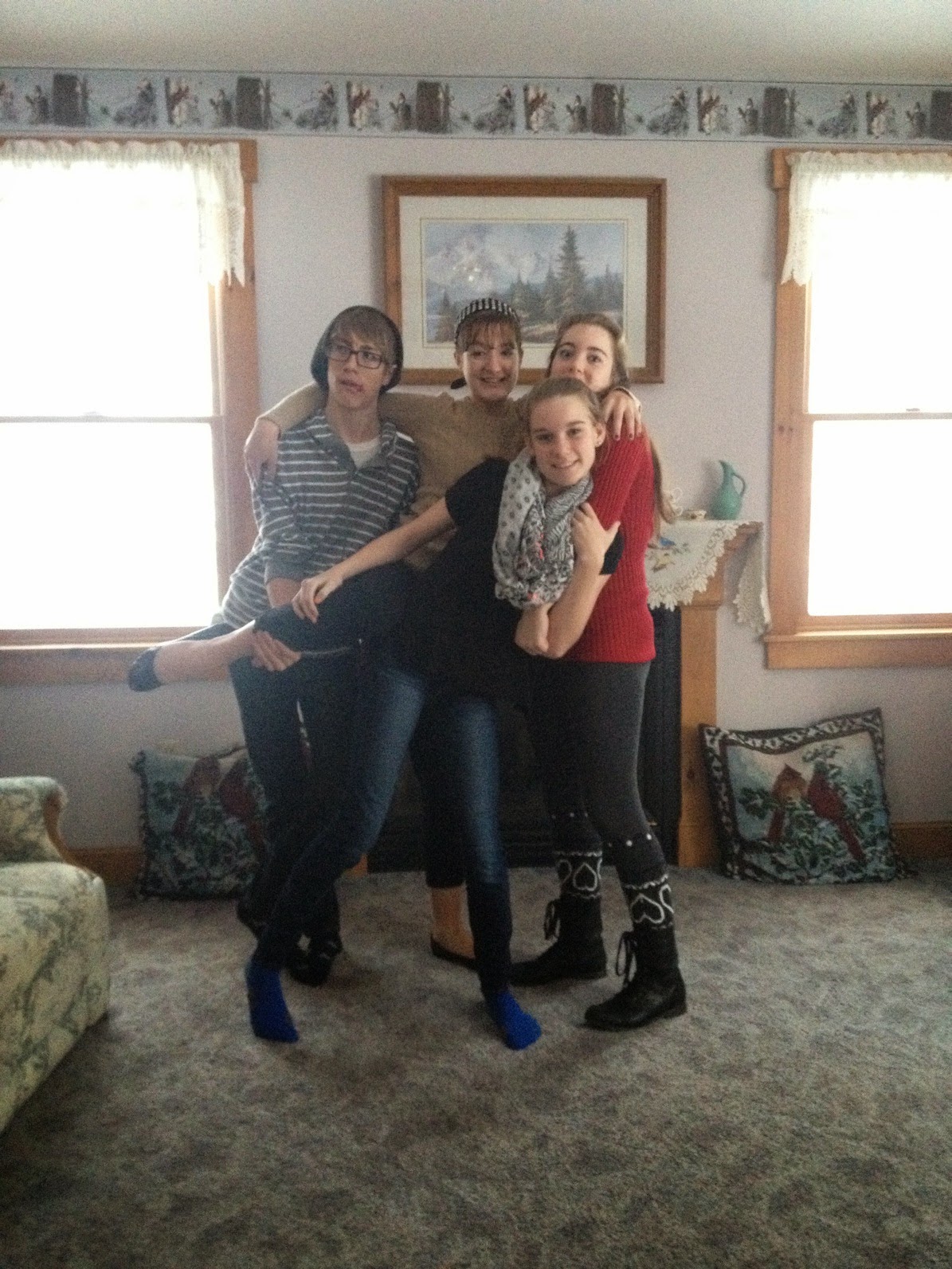 And a whole lot of peace, contentment, quiet (and not so quiet....) in rotation the past couple of days.

And really, who could ask for more?

We get so caught up in the flow of what's trending. We jump from media to media, endlessly scrolling through things we consciously don't care about yet can't pull away from. I recently read this post about using technology to connect. What stood out to me the most was when she said we scroll when we're most seeking to connect.

How sad is that?

We're sitting there, craving the love and support and interaction that only friendship can give, and we fill that void by scrolling. Maybe it's why we stalk our crushes...we want to interact with them, and that's the most painless (and least vulnerable) way to do it.

My biggest Christmas pet-peeve is this little speech, which I've already received three times from three different family members: "Don't be expecting a lot for Christmas, because we're broke and we can't afford to do much."

This speech annoys me. So. Much. Because really, I do expect a lot for Christmas. I expect my grandma's homemade rolls, and my mum's favorite cookies. I expect get-togethers with family and friends and lots of teasing. I expect embarrassing stories to be told about everyone. I expect people to make the effort, and to hug me when they walk in the door. I expect phone calls from friends and Christmas cards with real notes in them and gifts that people are excited to give, even if it's really small. I expect people to express their love of the family. I expect people to want to be here.

I'm really tired of the commercialization. It's made us treat Christmas as both too big...and too small. We've created a month-long Holiday event so covered in garland and lights that people dread it. At the same time, we've lost sight of the simple things that make Christmas special: the favorite cookies, the movie tradition, the cousins, the traveling to visit Grandma and Grandpa.

Why are we so afraid to live a little bigger?

And dig a little deeper?

To really look inside of ourselves, and with enthusiasm love people? And see the little things? And realize the importance of the big things?

Why can't we skip that one line, Merry Christmas facebook post, and call up our best friend to say it?

Why can't we stop apologizing for not spending a lot of money, and instead find the perfect gift for someone, even if it's super small?

Why can't we go back to handing out the homemade fudge, or that knitted scarf, without feeling like it's 'not good enough'?

Why can't we add a little, personal line to Christmas cards?

Why can't we remember to ask how people are really doing when we see them at the family party?

And why can't we try to keep this going all year?

I landed my axel on Monday! 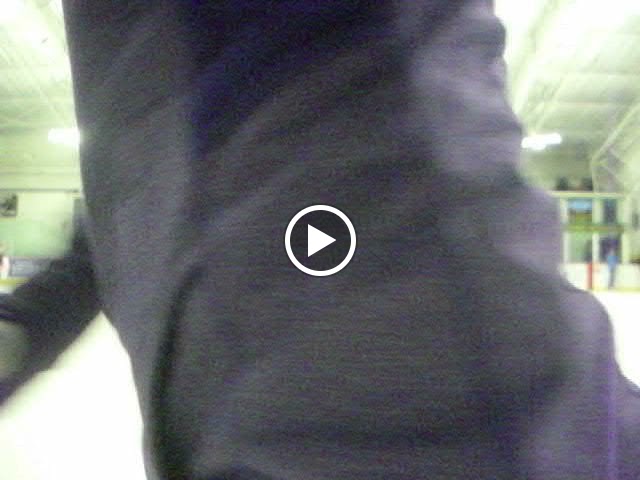 I also landed it on Tuesday, Friday, and Saturday. Wednesday was a disaster, but oh well. I've got it now, baby!

Those of you who read regularly have probably heard about my axel many times before. Going on three years, this jump has proved just out of my grasp. It had gotten incredibly close this summer, but that was almost more frustrating than it just being a hot mess. I was so, so close. And I just really, really wanted it.

Back when I did regular monthlies, my axel was included in every single 'goals list'. Off the blog, I don't know how many times I've written "Land my axel." It's written on legal pads, actual goal lists, journal entries in several different journals, random sticky notes, and doodled-on receipts.

I've been more than a little obsessive.

I was getting really frustrated, and honestly, sick of them. The same little side hop entry, the same two footed landing. Sometimes, the landing would be closer to one foot, but I'd fall. I didn't like working on them, because I just felt stuck. But at the start of this month, I was talking to my mum and I just said "I've got to do it this month."

I told my coach, "I want to land my axel this month, and then put it in the Christmas show. I just have to do it this month."

Perhaps this is obvious. But I can't help but be amazed that I said I would do it this month, and it happened. Like, I really did achieve that goal.

Oh my word, guys. I have my axel! I would like to offer myself as proof that, eventually, with enough focus and enough hard work, goals are checked off. Don't doubt yourself, because that's a surefire way to stay stuck forever.

This year, I tried a new goal-writing method. I wasn't satisfied with my "QUICK DO EVERYTHING" life-list, and for whatever reason, a list of monthly goals and objectives just seemed sterile. A couple of months ago I came across an amazing power-point online (which, apparently, I cannot find and can't link to....#bloggerfail), that presented a great way of organizing goals. Long story short:

Well, I made my lists. And I love them. I feel like my goals are challenging, and leading me in a good direction, but I also feel like I can really make great progress. My goal year goes June-June, which I prefer to January-December, and my 3-month plan ends on December 1. On the first of this month, I sat down and made a 1-month action plan, that highlighted the specific goals in the 3-month plan with action steps I could take every day to get there.

Landing an axel and landing a double (remember the 70% rule!) were on my 3-month plan. So, the specific steps I wrote down in my 1-month action plan were:
Then, I wrote down a cheesy mantra that I repeated over and over again:

And yes, I needed a mantra that was really cliche, and really hustle-y, to get that jump.

I'd been starting to feel really down in the dumps, and frankly, I wasn't very confident in my ability to land it. But, I did try to keep repeating this mantra, and in a cheesy way, I tricked myself into believing it. Gillian, you're good. You're strong. You're dedicated. You've got this.

You might say that I would have gotten my axel eventually, even without all these 'action plans' and mantras, and you'd probably be right. But, I know being able to focus, and channel my frustration into a fire to get it done, really pushed me. I love writing lists, and goal lists are something I've always tried to work with. But, this is the first system I've felt actually worked. You can bet I'll be updating my lists for the next 3-months.

What system do you use? And does anyone know what Power Point I'm talking about? I'd love to give some credit.