Thrifty Yankee Girl: Perhaps It's Not Just A Stereotype...

Hello, all! It's been quite a while since I've done an outfit post, hasn't it? I can only blame it on the fact that I'm lazy, which has resulted in lazy outfits and no pictures of the good outfits. :) Plus I been feeling a bit style/wardrobe drained lately. I've not been clothes shopping since last November, and honestly I think I only bought a camisole and an awesome (but rather hard to wear...) lace blazer. Hopefully with spring on it's way, though, I'll get more motivated to get out and shop!

I may be fulfilling a stereotype here, but I've got to tell you: Yankee girls love a bargain. And not in a, 'Well, I love getting something cheap!' sort of way, but rather a, 'What? I'm not paying that!' sort of way. I've come to the point where most of the clothing I actually like (not to mention the majority of my wardrobe in general) has come from thrift shops. I'm actually rather proud of that. :) Of course, thrift store shopping has it's drawbacks. Aside from the obvious issue of maybe not finding exactly what you want, there's also the problem of indecision. This is usually in the form of me worrying about wasting money on an article of clothing I'm only so-so about. Which in the end turns out to be quite hilarious, because usually the 'expensive' item I'm worrying about is $4-$6. But maybe that's just me. :P 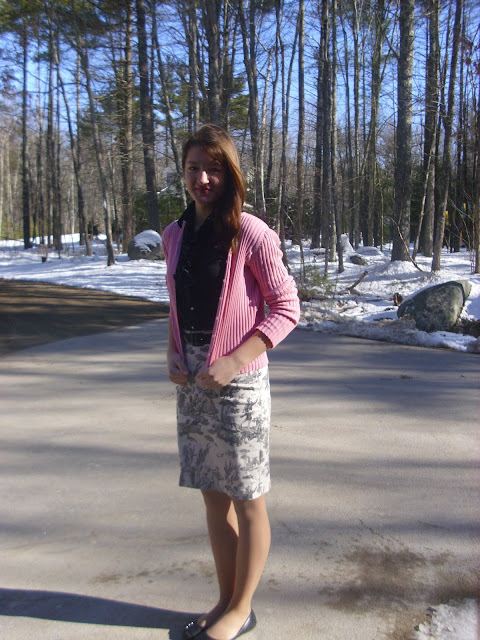 I wore this outfit to church last Sunday. It's insanely comfortable, because the pencil skirt is very stretchy. May I just take a moment and talk about the shoes, though? As much as I love heels, I've gotta admit; I swear by these black flats. I've had them for years, and they get worn several times every week. They work with everything. While I'm still a firm believer in heels, I think flats are the ultimate power-shoe. Name one thing a girl can't do with flats, hmmm???

I'm going to be linking up with Plane Pretty tomorrow. :)

Also, don't forget about the 30 Day Disney Challenge! It's starting in just two days! Once again, there's no minimum of days to participate....just stop by and do what you can! We can't wait to see you guys. :)

Thanks for reading, and Happy Easter, everyone!

Your Thoughts?: How many of you frequent thrift shops? Got any funny stereotypes about us Yankee girls you'd like to share? What are your plans for Easter?