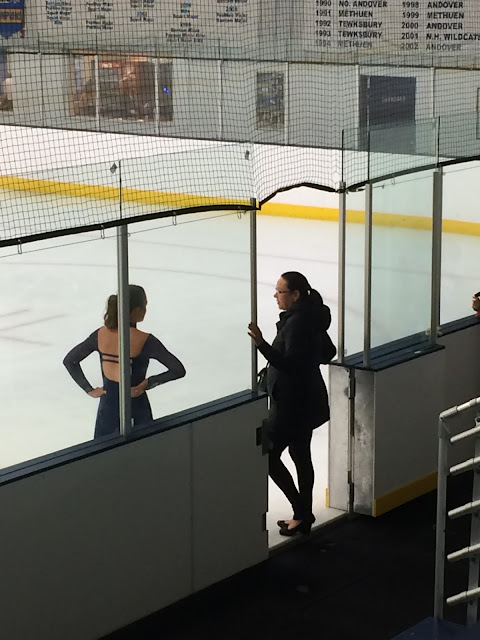 The other night at skating, it really hit me how hard getting through this Novice Freestyle test is going to be.

For readers that don't skate: to move up levels in skating, we need to pass tests that are created by the United States Figure Skating Association. There are multiple tracts to choose from, like Moves in the Field (footwork patterns), Freestyle (typical programs with jumps in spins), Pattern Dance, Free Dance, and so many more. Generally, there are eight levels in each tract. Once you pass all of them, you become a USFA Gold Medalist in that discipline (like becoming a black belt!). Right now, I'm a Moves in the Field Gold Medalist and am working on becoming a Freestyle Gold Medalist. I'm currently training for my Novice test, which is third to the last, followed by Junior and Senior.

I passed Intermediate Freestyle this past August, a test that took me two and a half years to get through. Although I've been skating since I was three, I started in an extremely recreation-based program, which led to spending most of my time in group lessons or private lessons with recreation-minded coaches. A late bloomer to higher-level skating, I didn't start landing axels and doubles until I was 18.

The move between being an Intermediate skater and a Novice skater is really hard. For Intermediate, the only jumps you need to pass are your singles, an axel, a double-salchow, and a double-single combination. For Novice, on the other hand, I need an axel, double-salchow, double-toe-loop, double-loop, and a double-double. Given that I need six jump passes, I'm doing two axels. And, since axels are relatively thoughtless now, I'm doing more complicated patterns into them, like 180's and spread-eagles.

That is all awesome! But. It means I have to worry about every. single. jump pass. This is the first time I've had to think that way!

At the moment, this test program is kicking my butt. For Intermediate, I focused-in and intensely trained for it, with no thought to anything else, for about 4 months. That was after having already had the program and been sort of working on it for about two years (I know. I'm the worst). Even then, it took skating about ten hours a week, three lessons a week, doing the jump patterns over and over and running through the program at least twice if not three times a session to make it trend towards mostly clean run-throughs. If I did all of that for Intermediate, and still messed up one jump in the actual program when I took it, what on earth am I going to have to do for Novice?!

Fresh out of high school, I knew that all I wanted to do was improve at skating and figure out someway to turn it into a career. At 18, I was simultaneously completely oblivious and unaware of my (lack of) quality of skating, lack of experiences, and who I even was as a skater, while also throwing myself into anxious, panicked fits of self-loathing and inadequacy. I knew that in that exact moment I wasn't hire-able  in any capacity, and while I kept the softest flame of hope that with a lot of work I could be, I also had zero idea of how to make it happen.

But. That was two (almost three!) years ago. Today, I've left my limiting coach situations behind, and now have a dedicated team that's working for me. I've made the cut on higher-level TOI teams, competed internationally with them, and worked with top choreographers. I've attended auditions, competed Showcase, and gone to every single workshop and seminar I can get myself to.

I am nervous about Novice, because I want to pass it this winter (I'm talking this December or January, at the latest). My program is not a typical test-program with a lot of filler stroking; every single second is choreographed, and that is making it even harder. But, I'm also super excited, because I feel that while getting this trained enough will be hard, I also feel like it's totally doable.  Passing Intermediate was a big deal for me because it was about more than just passing the test: it was about staying committed to skating as an adult, making changes to my life so my my dreams became achievable goals, and finally conquering some of the mental demons that had been holding me back for years. I did a lot of good work--on the ice, off the ice, in my head--to get Intermediate ready. I'm totally capable of doing that for Novice, too.

In order to pass Novice in 1-2 months, I'm putting my energy towards these things:

-Completing 2-3 run-throughs every single session.
-Practicing my jumps almost entirely in pattern, and in sequence with the other jumps, too.
-Committing to never quitting run-throughs (a bad habit of mine!), and fighting through the bad ones instead.
-Using this program for several holiday shows that are coming up, so I can practice executing the jumps under pressure.
-Doing cardio off the ice again, to improve my stamina.
-Staying mentally positive and focused, and putting emphasis on how I'm working through issues, not the fact that there are issues.

I finally feel like anything I want to accomplish is within my wheelhouse, it's just a question of whether or not I decide to commit to the process of getting there. That's kind of a cool place to be.