Well, last Sunday marked the end of Downton Abbey, Season 3. While I enjoyed the show enough to watch all three seasons, I definitely don't think Downton Abbey will be making it onto any 'top ten' list. Well, at least not my Top Ten List. Though it featured wonderful characters, superb actors and set, as well as an unusual time period (strange how most things focus on WWII instead of WWI...), overall I felt it to be a bit unoriginal and soap-opera-ish.

Note: From here down, they'll almost certainly be many spoilers thrown into the mix.....read with caution!

The writing: Though there are certainly many witty one liners and twists in the plot, I do feel that the writing could have improved greatly. In many ways I thought the script rather predictable. It may be mean to say it, but I think that one of the reasons Downton Abbey has gotten such a following is because it's so much more...modern...than other, similar mini-series. It's easy; not deep or thought provoking. Unfortunately, that type of material is appealing to the world.

Lady Edith: You would think I've already said everything about Lady Edith after a whole post on her, wouldn't you? Nope, I've got more! First off, hats off to Lady Edith for standing up to her father and writing to the paper! She has opinions, the resources to research her opinions, and the skills to say something. I even liked her editor; until he started flirting with her and we found out he's married. Yes, I pity his situation of being married to a mad woman and feeling lonely, but that doesn't give him the right to just drop his marriage. What ever happened to 'in sickness and in health'?

Branson: I've grown to love his character even more than I did in Season 1 (if that's possible...). He was certainly trapped after Sybil died; he was still an outcast to most of the family, so staying with them would be awkward. At the same time, he couldn't raise his daughter above a garage in Dublin without help. I was very scared he was going to have to leave Baby Sybil with the family and go on his own way, which would have made me very mad. In the end, though, I was happy to see that he was able to settle in to the life of Downton Abbey, without loosing his identity. I'm also very happy he stuck to his guns about having Baby Sybil christened as a Catholic. It's his daughter, therefore his decision, and nobody else's.

The maid that flirts with Branson and his reaction: Yes, this requires its own section! I was seriously screaming at the TV during all of this. Who does she think he is? First off, even if he used to be a driver, it still wasn't her place to speak to him in that way. It shows absolutely no respect for her work, much less respect of the family and his late wife. Secondly, how could she come out and even say those things in the first place? Even if they still were the same 'station', what she said was plain rude. "Are you embarrassed because you've risen above us?" please. I was very worried Branson would go do something idiotic and rash, but thankfully he didn't. I don't blame him at all for being lonely; here he had his entire life out in front of him with Sybil, and then he's left with just the baby in a country he hates with a family who obviously don't like him. I love when Mrs. Hughes talks to him after she makes the maid leave. He did go through a lot, and he did handle it well.

Lord Grantham: If you heard me yelling at the TV, you could assume that the father was at it again. Apparently Season 3 was the season for one rude comment, stupid decision, and whiny speech after another. First off, I do believe he was the one mainly responsible for Lady Sybil's death. He should have given the decision to Branson, since he was her husband, in the first place, instead of acting like it was his responsibility. Then there was situation when Mathew tried and fix the money issue. Is Lord Grantham just going to ignore the fact that Downton is dying, and the only reason it's still alive is because of his wife's money? Speaking of which, he is always talking about being happy in your marriage. He believes that Sybil will not be happy with Branson, or Edith with Sir Anthony. And yet, he apparently felt the need to send of to America for a wife so he could marry for money...interesting.

How they treat Americans: Sorry, couldn't resist. Maybe I should just expect it now that I've been watching BBC for years, but do they seriously have to bash us in every mini series they do? No, we're not all rude floosey's with no repspect for tradition. I especially dislike how Lady Mary is always saying to her mother, "well, you're American and I'm British." No, Mary, you're half American, and you owe us a lot. While your father's family was out sipping tea and spending their old inheritance, your mother's family was out working and prospering to create a fortune that would eventually save your precious Downton. A little respect, or at least gratitude, please.

Mathew and Mary: I'm not going to lie, both their characters had to grow on me. I didn't like either in Season 1; she was too rude and he was to wishy-washy. But by Season 3, I absolutely loved both of them, specifically the great couple they made. They're perfect together. Did anyone else cover there eyes when Mathew's car crashed? Dreadful. And then that scene with his head bleeding, followed by the footage of Lady Mary with their baby? It was awful. They put you through mental trauma when he dies, and then leaves you with Mary's last moment of pure happiness. What was the point? Why kill him? There was absolutely no need! Although Lady Sybil was my favorite sister, I was much more mad about Mathew dying than her.

So, do you think they'll be coming out with a Season 4? I certainly hope not, but it seems rather likely with the huge following they have now. Thank you so much for reading! As I said before, I'm not trying to be rude to the writer, actors, or others involved in bringing Downton Abbey to us. These were simply my honest opions--and I'm curious--what do you think?

Your Thoughts?: What were your overall thoughts of Downton Abbey? Which was your favorite sister? What was your opinion on the writing quality, and what would you have changed? During the show, did you ever find yourself yelling at the TV? Were you more upset over Lady Sybil's or Mathew's death?

Thanks for reading! :)
No comments:

Yes, I've been a bad little blogger.....it seems every time I set my mind to do all these posts, be creative and of course very witty, I just end up in a blogging rut. :) I have had this blog for about 8 months now, but still struggle with the actual writing. I really admire the bloggers who post tutorials, recipes, link parties, outfits, all with gorgeous photos; but putting that in action on my blog is a totally different story! Unfortunately, my life is too busy to commit to a regular posting schedule, and camera issues always affect my outfit photos! But through all the frustration of not being one of *those* blogs, I've realized what kind of blog I can be. I've discovered that posts that focus more on writing, whether it be book reviews, movie suggestions, or general musings, are the way to go. It's been a long time in making this decision, but it's one that I know will be the best for me!

Believe it or not, that's not what I intended this post to be about! My friend, Deanna and I, recently took a trip together to Joann's and had way too much fun! I've been scheming for awhile about this year's prom dress, and this year I'm going for a very vintage look (not like I didn't last year....(:) 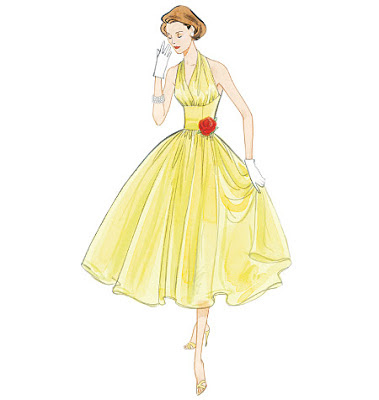 This is the first time I'm going to be working with a fancier fabric, and the first time I'm using a Vintage Vogue pattern! I'm very excited, but also a little worried; I've heard mixed thoughts on their pattern fit/sizing/instructions. So wish me luck!

I've bought 9 yards of satin fabric, in two slightly different shades of dark green, for the lining and main fabric (the color is rather similar to this).

I may start cutting fabric tonight or tomorrow, and am so excited to get started! Keep your eyes out, as I hope to be posting about the dress at different stages during the making!

Your Thoughts? Do you have any sewing projects planned, or in the making? Have you ever used a Vintage Vogue pattern? What were your thoughts about the pattern? Do you often sew more formal dresses, or casual go-to pieces?